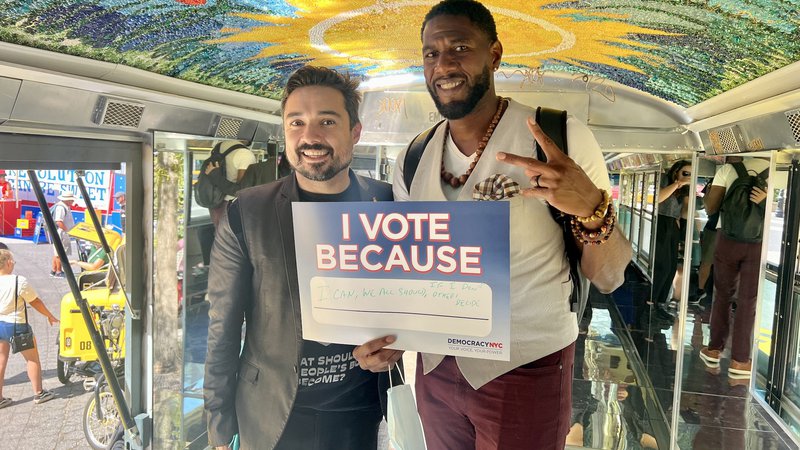 Whether you are voting early, absentee, or on Election Day, remember to flip your ballot! In addition to individual candidates, New Yorkers will vote on four ballot proposals that will impact daily life in New York City and State.

As Public Advocate Jumaane D. Williams recently expressed: “In preparation for this upcoming election, it is very important that New Yorkers remember to turn over the ballot as we will be voting on three ballot measures” at the city level, and one for New York State. “New Yorkers will have the chance to vote for measures that will help to dismantle structural and institutional racism." Read the Public Advocate’s full statement on the three revision proposals to the New York City charter, and find more information on all four proposals, and some Election Season essentials, below.

You can also view your Sample Ballot before you vote, to give you the most time to research and decide how you will vote. Visit FindMyPollSite.vote.nyc and enter your address to “View Sample Ballot.”

Add a Statement of Values to Guide Government

This proposal would amend the New York City Charter to:

Add a preamble, which would be an introductory statement of values and vision aspiring toward “a just and equitable city for all” New Yorkers; and

Include in the preamble a statement that the City must strive to remedy “past and continuing harms and to reconstruct, revise, and reimagine our foundations, structures, institutions, and laws to promote justice and equity for all New Yorkers.”

The preamble is intended to guide City government in fulfilling its duties.

This proposal would amend the City Charter to:

Require citywide and agency-specific Racial Equity Plans every two years. The plans would include intended strategies and goals to improve racial equity and to reduce or eliminate racial disparities;

Establish an Office of Racial Equity and appoint a Chief Equity Officer to advance racial equity and coordinate the City’s racial equity planning process. The Office would support City agencies in improving access to City services and programs for those people and communities who have been negatively affected by previous policies or actions, and collect and report data related to equity; and...

Establish a Commission on Racial Equity, appointed by City elected officials. In making appointments to this Commission, elected officials would be required to consider appointees who are representative of or have experience advocating for a diverse range of communities. The Commission would identify and propose priorities to inform the racial equity planning process and review agency and citywide Racial Equity Plans.

Measure the True Cost of Living

This proposal would amend the City Charter to:

Require the City to create a “true cost of living” measure to track the actual cost in New York City of meeting essential needs, including housing, food, childcare, transportation, and other necessary costs, and without considering public, private, or informal assistance, in order to inform programmatic and policy decisions; and

Require the City government to report annually on the “true cost of living” measure.

Be sure to Get Out the Vote this election season! The future of New York State and New York City belongs to each one of us.